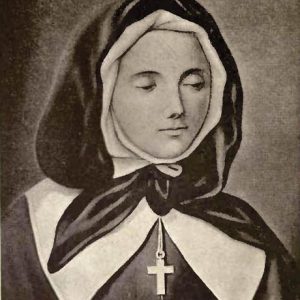 Sometimes who you know determines where you end up; for Marguerite Bourgeoys, it was Louise Chomedey. She was a sister in the cloistered Congrégation de Notre-Dame of Troyes and director of an extern group of women. When Louise’s brother, Paul Chomedey de Maisonneuve, Governor of Montreal in New France, asked his sister for help in finding a teacher for the settlement, Louise suggested Marguerite, the leader of the group of young women who taught the children of the poor. 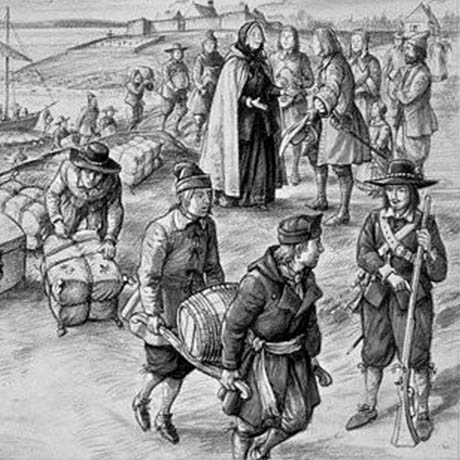 Marguerite was born in Troyes in the Champagne region of France in 1620. At the age of 20, she experienced a profound change in herself during a church procession that led her to set aside the frivolous things of life. By the time she met Monsieur de Maisonneuve, her qualities of leadership and her ability to gather people together for a common cause were well recognized.

Marguerite Bourgeoys listened to Maisonnneuve’s request and agreed to accompany the recruitment of 1653 that would shore up the defences of Ville-Marie and its fifty-some inhabitants against the constant attacks of the Iroquois. During the treacherous sea voyage to the New World, she became nurse, confidante, support and firm friend to the men and women whose arrival tripled the population of Montreal. 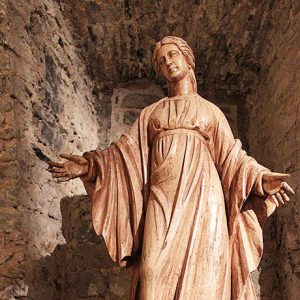 Woman of Vision and Warmth

Marguerite joined Maisonneuve and Jeanne Mance, the hospital administrator, as an equal in the affairs of the settlement. She understood that the women of the colony had a significant role to play in the future of Canada. Ever practical, she opened workshops where ordinary women learned skills that enabled them to earn a living. She welcomed the filles du roi whose coming provided stable families and guaranteed the survival of the country. She lived with them, prepared them for their new role and witnessed their marriage contracts.

A Chapel, a School and a Community of Women

In 1655, she rallied the inhabitants of the town to help realize her dream of building a chapel as a site of pilgrimage within easy walking distance of the settlement. After delays and some uncertainty, in 1675 Montreal’s first stone chapel was erected.

When the stable school opened in 1658, the children of the colony learned the basics of their faith, as well as counting, reading and writing. The older girls learned household skills to prepare for their responsibilities as wives and mothers. And traditionally, on the feast of Saint Catherine in November, they all made taffy!

Once the school had opened, Marguerite Bourgeoys returned to France to find companions who shared her vision. Together they formed the nucleus of the Congrégation de Notre-Dame, a community of uncloistered women. Ecclesiastical approval for such a radical lifestyle for women, unheard of at the time, was not granted until just two years before Marguerite’s death in 1700.

Back to the Beginnings

Saint Marguerite Bourgeoys was canonized in 1982. She was a pioneer, who worked in an outpost of the French empire. She built houses,  established a farm and opened schools for children of the colony. She was deterred by neither bishop nor king in the pursuit of her mission. The Church presents her to us now as a model for modern times. In a moving ceremony in May 2005, the sisters of her community and the people of Montreal brought her mortal remains in procession to Notre-Dame-de-Bon-Secours chapel. They carried her through the neighbourhood where she had lived and worked and died to finally rest in her chapel, where she can be found today. A woman of courage, vision, compassion and deep spiritual strength remains with us today, part of the fabric of our lives.

For further information on Marguerite Bourgeoys, see the website of the Congrégation de Notre-Dame.