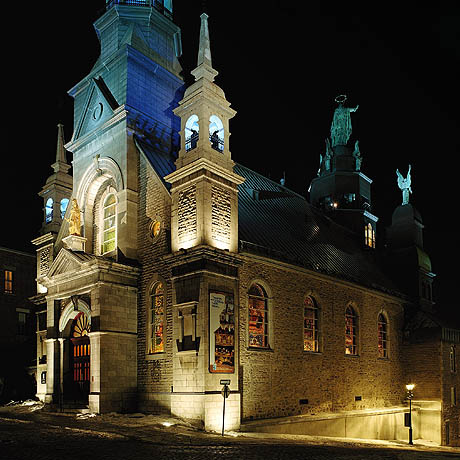 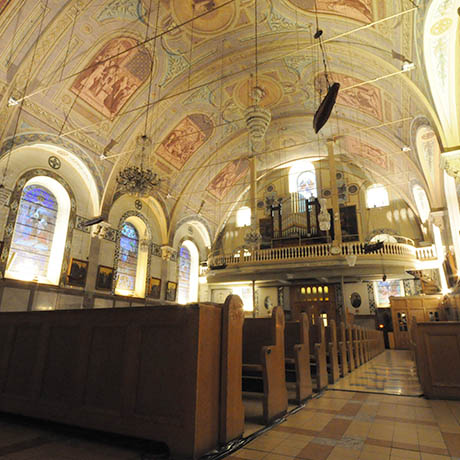 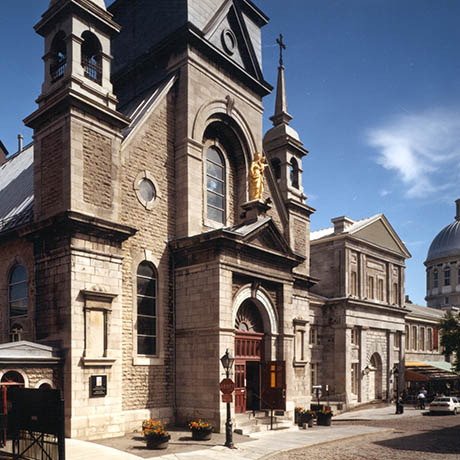 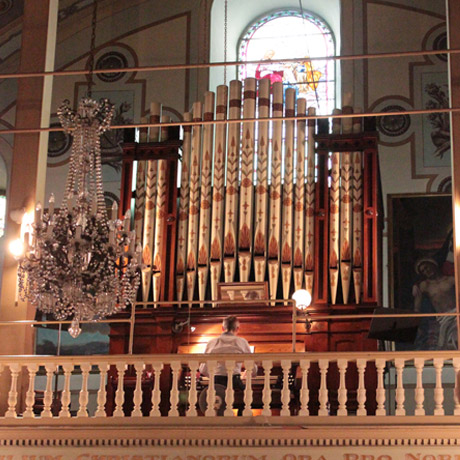 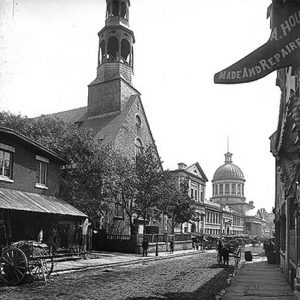 A Historical and Heritage gem

For over 350 years, the Notre-Dame-de-Bon-Secours Chapel has made its way into the hearts of generations of visitors and pilgrims. As you step into the church, you will immediately notice the peaceful atmosphere and feel a palpable link to Montreal’s past.

The first chapel was originally a site of pilgrimage. The actual chapel, built in 1771, was constructed directly on top of the first stone chapel whos foundations were recently uncovered.  This is also the site where officers of the British regime considered setting up barracks to house the military. It is a silent witness to the faith of Montrealers who rebuilt a chapel when it seemed impossible. 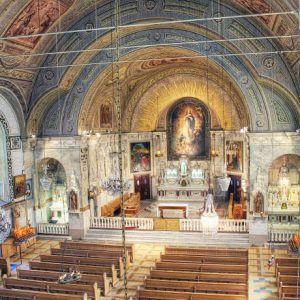 You turn to two cameo paintings by Ozias Leduc on the back wall. One shows Paul Chomedey de Maisonneuve, founder of Montreal, who donated the land for the original chapel. The other is of Marguerite Bourgeoys, the first teacher and founder of the Congrégation de Notre-Dame. In 1655, she rallied the colonists to build a chapel of pilgrimage outside the settlement, a stone chapel finally erected in 1675. After a second trip back to France in 1672, Marguerite returned with the wooden statuette of Notre-Dame-de-Bon-Secours for the chapel, the one in the reliquary on the left side-altar.

Along with the chapel, the little statue has an interesting history. Possibly the most spectacular moment for both was that fateful day in 1754 when fire ravaged the first chapel, and the statue and its reliquary were found intact among the smoldering embers.

Cradle of the English-speaking Catholic Community

After the fall of Montreal six years later, the British garrison included Irish and Scottish families who attended services at Notre-Dame-de-Bon-Secours. It was from this community that money was raised to begin construction of Saint Patrick’s, Montreal’s first parish for the English-speaking community.

Under the choir loft, you spot an intriguing painting, the gift of Bishop Bourget in 1849. This votive offering was a gift in thanksgiving for the end of the typhus epidemic that struck the city in 1847 with the arrival of immigrants in fever ships. Another of his gifts, the statue by Charles Dauphin called Star of the Sea, was raised to the roof of the chapel overlooking the port.

As the port grew in importance in the 19th century, the chapel became a favourite place of prayer for sailors. The carved replicas of sailing ships hang from the vault of the chapel as a reminder of their faith in Notre-Dame-de-Bon-Secours.

Succeeding generations have contributed to the decoration and renovation of the chapel: Beaulieu’s windows, the statues of Gratton and Laperle and of Guardo, and the 1886 works of Meloche uncovered in the late 1990s on the vault of the chapel.

The Tomb of Saint Marguerite Bourgeoys

In 2005, the 350th anniversary of Notre-Dame-de-Bon-Secours was especially joyful when the “mother of the colony” returned to the chapel in Montreal’s historic district where she had lived as a beloved friend and valued counsellor to all. Her remains were placed in the left side-altar below the statue of Notre-Dame-de-Bon-Secours. A few weeks later, the remains of Jeanne Le Ber, the recluse of Montreal, were interred in the east lateral wall of the chapel.

The Bonsecours Experience service will make you see the Chapel differently.  Key figures in the history of Notre-Dame-de-Bon-Secours explain its fascinating past. The Bonsecours Experience tour also gives visitors a better appreciation of the decoration and architecture of this treasure dating back to the 17th century and to the works of art it contains. They can even listen to the lovely tones of its 1910 Casavant organ.